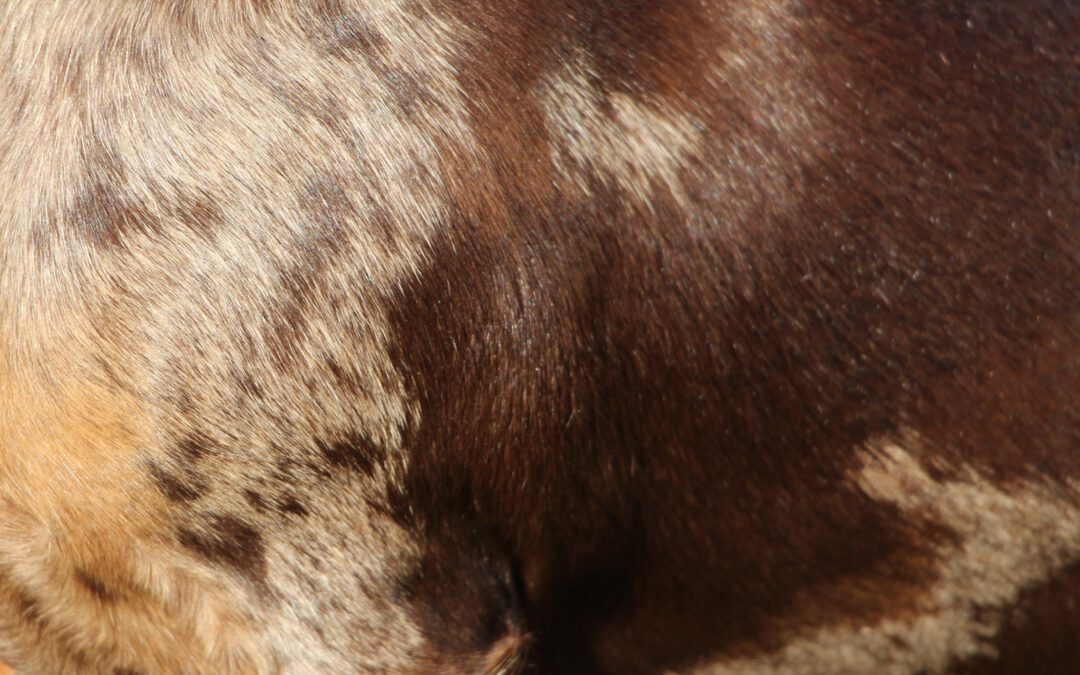 A study published in August 2021 (The PMEL gene and merle (dapple) in the dachshund: cryptic, hidden, and mosaic variants demonstrate the need for genetic testing prior to breeding) describes various merle expressions in the Dachshund. The results of the study underscore the need for genetic merle testing prior to breeding, as dogs with no visible merle expression were identified; including a merle mosaic involving Mh (harlequin merle) that produced puppies with severe eye malformations when mated to a merle breeding partner. The study appeared in the publication Human Genetics and is available at the following link: https://link.springer.com/article/10.1007/s00439-021-02330-y.

Merle is one of the traditionally occurring color varieties in the Dachshund and has early documentation. The oldest pictorial evidence I found is from 1897 and shows a “Weisstiger,” a dog that is homozygous for merle alleles with higher base lengths of the merle insertion:

This photo belongs to a detailed article about “white Dachshunds”, in which already at that time a distinction was made between “Weisstiger” and “white dachshunds”. The author reported in detail about his observation that “Weisstiger” were very often accompanied by deficits such as deafness and “glass eyes” (that’s what they called light blue eyes) and deformed eyeballs, whereas the “white dachshunds” (i.e. the extreme white spotted Dachshunds) had dark eyes and no visually impairments.

From the year 1902 comes this illustration of a German dog book, it shows a Tigerteckel (“Teckel” is the German breed name for Dachshund and “Tiger” is an old fashioned description for merle dogs. So, Tigerteckel is a German word for dapple Dachshund):

This brown Tigerteckel male was offered as a stud dog in a Swiss publication in 1907: 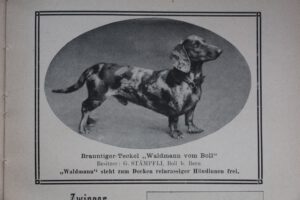 These Tigerteckel were pictured in German dog books from 1922 and 1935: 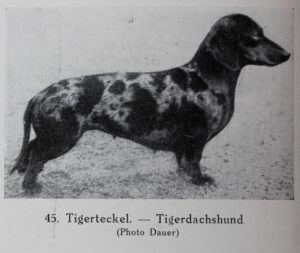 Dapple Dachshunds were also bred in English-speaking countries over 60 years ago, as these two photos from British dog books from 1952 and 1956 show: 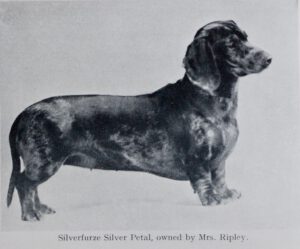 A German dog book, which appeared around 1965 (The German dachshund, Dr. Kurt Schneider, Albrecht Philler publishing house) shows again a Tigerteckel with white and with so-called glass eyes (blue eyes). The caption stresses that it was today (thus at that time) a rarity. From today’s point of view it is not clear whether this dog is a “Weisstiger” (i.e. homozygeous merle with alleles of the high base lengths), or possibly a heterozygeous merle (e.g. M/m) with additional white spotting. Theoretically it could also be a Harlequin Merle (Mh/m), because this genotype also can reduce pigment to white, typical as a broad white ruff. 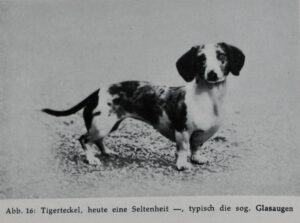 In a German book about Dachshunds from 1974 (Dachshund, Dr. E. Schneider-Leyer, Humboldt-Taschenbuchverlag) the following can be read: “(Spotted (dappled (…)) Dachshund: Light, brownish, gray to even white ground with dark irregular patches (large patches not desirable) of dark gray, brown, red-yellow or black color. It is desirable that neither the light nor the dark color predominate.”

Elsewhere in this book it is pointed out that animals inherited for the “tiger” hereditary factor are deaf, blind and degenerate.

Since a genetic test for the merle factor could not be done until after the molecular genetic identification of the merle insertion in 2006 (and the more precise determination of the base lengths still some years later), it was not even possible until then to identify a hidden merle, mosaic merle, or minimal merle (a hidden merle is a dog in which the merle pattern is not visible, because it does not deposit any eumelanin, but only the predominantly reddish pheomelanin in the hair, e.g. a red Dachshund. A merle mosaic is a dog that has different merle genotypes in its cells and a minimal merle is a dog that has a visible merle pattern only in a very small area of the body (this can be the case with the genotype Mh/m or with some merle mosaics).

Interesting in the current study is also that atypical merles were found, in which the black pigment is uniformly lightened to a gray hue. This may lead to confusion with color dilution. Light gray Dachshunds were already shown in an illustration in a dog book from 1905 (the middle dog in the bottom row): 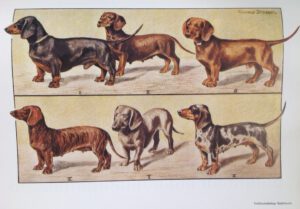 Whether the coloration of this dog is dilution or atypical merle cannot, of course, be judged in retrospect.

In any case, in modern Dachshund breeding, the breeding dogs should be tested for merle to avoid accidental matings of merle dogs of the higher base ranges. Classical merle (M/m), which leads to the typical tiger pattern, is not associated with the risk of malformation of the organs of vision and/or auditory systems, according to current knowledge. Breeding with harlequin merle (i.e. the allele Mh) should be avoided, as well as mating of certain base ranges with each other. 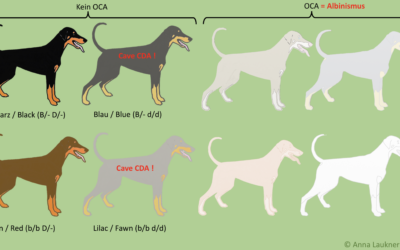 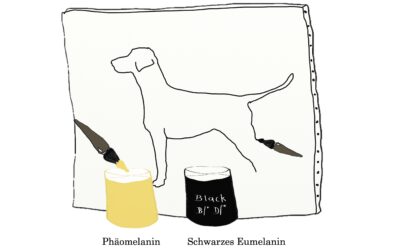